HPAP endorses the upcoming National Day of Action on the Overdose Crisis.

Poverty exacerbates and can also be a consequence of substance use. Those with lower income and unstable housing often lack the space and resources to use drugs safely. They also face barriers to seeking treatment.

Too many lives have been lost prematurely due to delayed action on the overdose crisis. 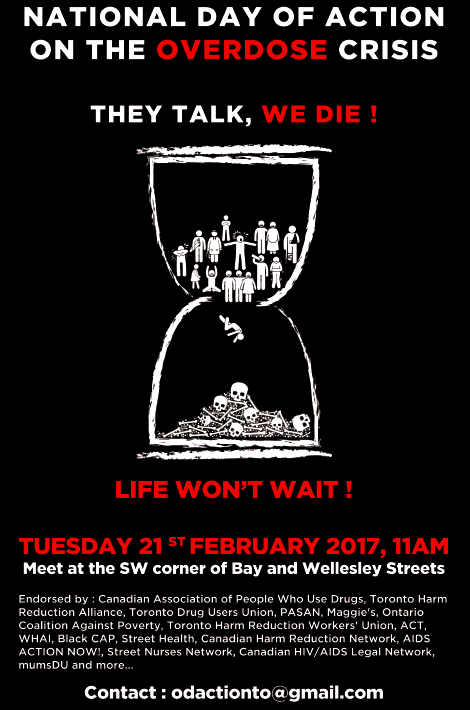 We are in the midst of Canada’s worst overdose epidemic. There has been a 328% increase in overdose deaths since 2008. Thousands of people have died across the country.

When SARS hit our City in 2003, resources poured into the system. Funding was released, networks sprung up, and health care workers were redeployed.  44 people died across Canada during the SARS crisis.  Why has the response to the overdose crisis been so slow?

1 person dies of an overdose every 13 hours in Ontario.  We need immediate action now!

Drug users’ lives are not disposable.  Overdose is preventable.  Join us on Tuesday February 21st to demand better for people who use drugs.

As part of a national coordinated day to raise awareness and demand real action on the overdose crisis, drug users, harm reduction workers and their allies will be meeting at the S/W corner of Bay & Wellesley at 11:00 am for a Memorial March and Rally.